Omikjon has spread to 57 countries, and the sea freight price will rise again!

Following the Alpha, Beta, Gamma and Delta mutation viruses, unfortunately, we have a new variant of Omicron. What impact will this have on cross-border people as the Christmas holiday approaches? Will the demand surge and the supply chain price rise, but the logistics is in trouble, as before?

On November 9, South Africa confirmed the first case of new strain infection. On the 26th, the World Health Organization (WHO) named the mutant (B1.1.529) "Omicron"。

Since its discovery, the number of cases infected with the mutant virus has been increasing.WHO Issued on the 7thofThe Latest Weekly Epidemiological Report of Coronary PneumoniaDisplay,There are alreadyThere are 57 countries or regions with Omicron virus strains, most of which are related to travel.

From South Africa toNew varieties reported by WHO (November 24)toOn November 30, in just a few days, at least 32 countries or regions around the world tightened their entry restrictions on African countries such as South Africa. Among them, the United States, which sellers pay more attention to,As early asOn November 29, passengers from South Africa, Botswana, Zimbabwe, Namibia and other eight countries were prohibited from entering the country. What's more, Japan and Israel, for example, directly "seal off" and suspend the entry of foreigners.

The emergence of a new strain of "Omikjon" has aroused global vigilance，Shipping tensions will further intensify.

For this reason, some operators expressed reluctantly that,The epidemic is really endless, affecting the lives of too many people。

Parties"Advice" is only for solving port congestion

Although the Omicron mutation virus has raised the sea freight price to a new height again.

However, the main reason for the rising sea freight price is the blockage of global ports, which leads to the low efficiency of ship turnover。Shift companyalsoThe cost of shipping can only be increased continuously to prevent more ships from going to the port.

Among them, the congestion of Los Angeles Port and Long Beach Port in the United States is particularly noticeable。

On the other hand, new regulations have also been introduced for ships queuing for unloading at Los Angeles Port and Long Beach Port to ease"Long lines".

New regulationsThere is a queue for each ship"Pit location". requirementContainer ships in Los Angeles Port and Long Beach Port slowed down and dispersed. When waiting for the port berth,It must stop at the specified position.Slow ship speed can reduce fuel consumption and emissions, and wait until the berth is available before arriving at the port.

Chief Executive Officer of Pacific Maritime AssociationJim McKenna said that the new queuing process is more fair and transparent, which can significantly reduce the number of ships parked near Los Angeles and Long Beach ports, and help the ports operate as efficiently as possible.

However, the latest data36 container ships are berthed at the anchorage. There are 25 other ships waiting for berthing within 40 miles, totaling 61, and 32 container ships whose actual arrival time is earlier than CTA, totaling 93. At the same time, the average waiting time of the ship reached 18.6 days.

In general, the queuing order has changed, and the ships waiting for berthing in Los Angeles and Long Beach haven't changed substantially.

alsoFor old cargo at the port,Port of Los Angeles and Port of Long BeachA policy, levy surcharges on the shipping company.

But the policy isNovemberOn the 29th, the implementation was postponed for the third time. The reason is that the port is reducing the accumulation of goodsobtainGood progress, inSince the first announcement of the intention to impose fines on October 25, the number of containers at the terminal has dropped by 37%.

But in fact, the portIs the congestion really relieved?

Although the fine policy has not been formally implemented，But alsoFor many cargo containersWith the effect of "intimidation", the speed of containers leaving the port has been significantly improved,letThe number of old goods piled up at the port has decreased by about33%。 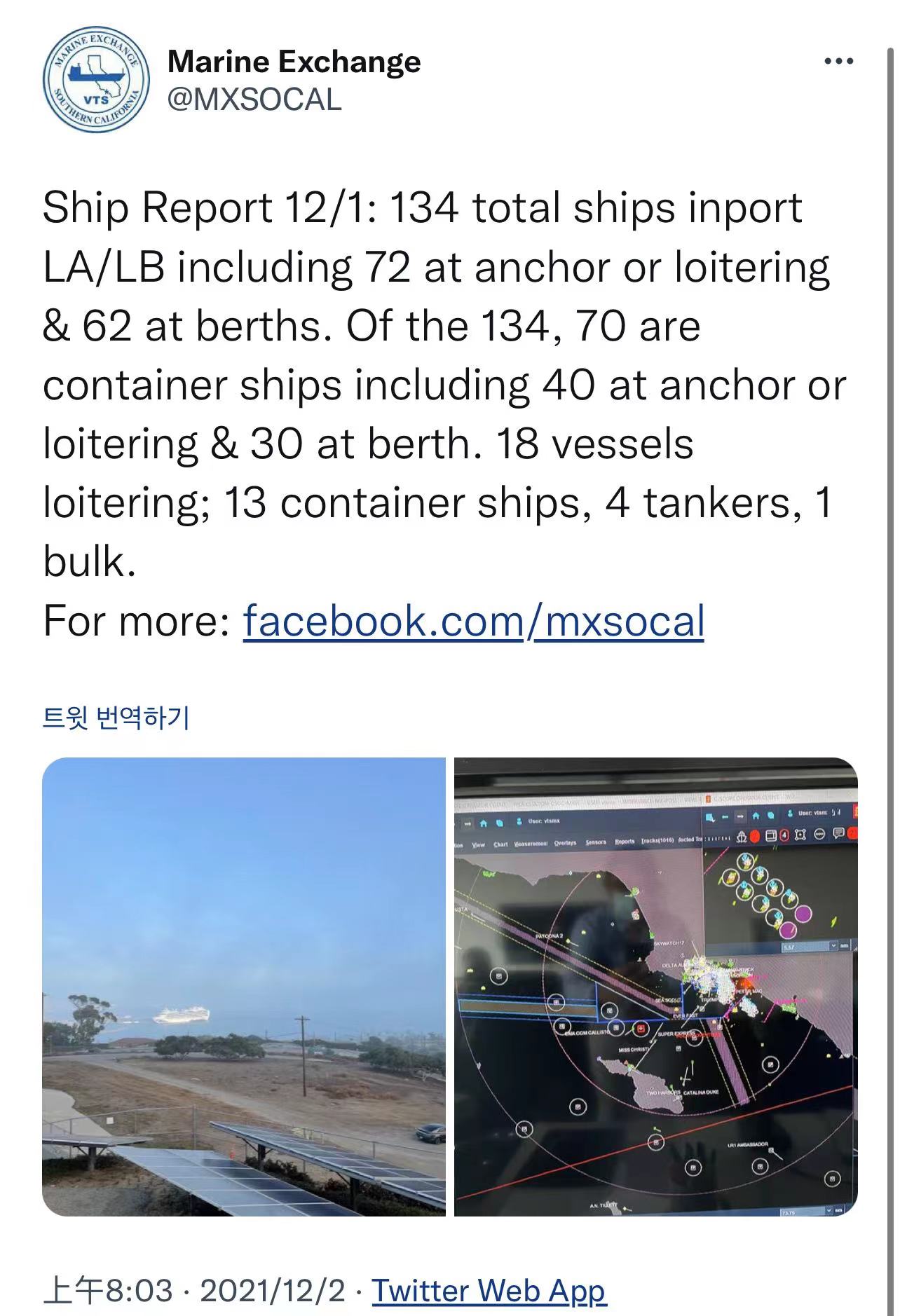 According to the National Retail FederationGlobal Port Tracking Report in November，forecastThe import volume in 2021 will be 16.2% higher than that in 2020.AndCompared with the same period in 2021, the import volume in the first half of 2022 will increase by 2.9%。This also means that the port may be blockedOnly in 2022 can we see the "dawn" of relief.

Not only that, the shortage of port workers led to slow unloading speed and more and more containers; The welfare system of the United States also reduced the enthusiasm of American workers, preferring to receive relief payments rather than work; Containers piled up in the port have generated huge retention money, which also makes some cargo owners give up picking up goods directly……Now, the mutation of the Omikron epidemic has also made the port that was not peaceful even more"The snow makes the frost worse".

According to the above reasons, when the problem of soaring sea freight prices caused by port congestion can be solved remains to be discussed.

Under port congestion, holiday sales are still expected to grow

It is less than three weeks before Christmas. However, many Americans may still have Christmas gifts"Wandering" on the sea

In addition,CNBCstayDecemberWe also conducted a survey on American consumers at the beginning.The results show that the average American plans to spend on gifts this yearUS $1004，Increase over last year13%。Among them,15% plan to increase expenditure, up from 11% in 2020; 35% plan to reduce expenditure, down from 39% last year.

The survey also found that half of Americans said they would buy most or all of their goods online。 Among them,35% of AmericansYour first choice isAmazon；The second isEtsy and other local business websites（7%）； thenWal Mart website（5%）。

Although the sales report of Heiwuhe Wangyi this year is not as good as that of last year, in any case, the Christmas holiday is still expected by many sellers, hoping for miracles.