A batch of accounts have been suspended for no reason, and 15 year old sellers will exit

Account suspension is not a trivial matter. It will also affect the seller's sales in just a few hours, but sometimes"Mistaken killing" has even provoked the sellers to complain. Recently, eBay suspended a number of sellers' accounts due to the platform, which caused a lot of roast.

Like Amazon, Wal Mart and other platforms, most accounts are suspended for good reasons, usually involving some questionable activities, such as fraudulent pricing, infringement of intellectual property rights, or violation of the platform's sales regulations. These problems lead to closure and the seller has nothing to say.

It is reported that almost every weekEBay sellers posted cases of their accounts being suspended for no reason on social media. But last Friday, many sellers' accounts were suspended by mistake, and one seller shared his "dramatic" experience. 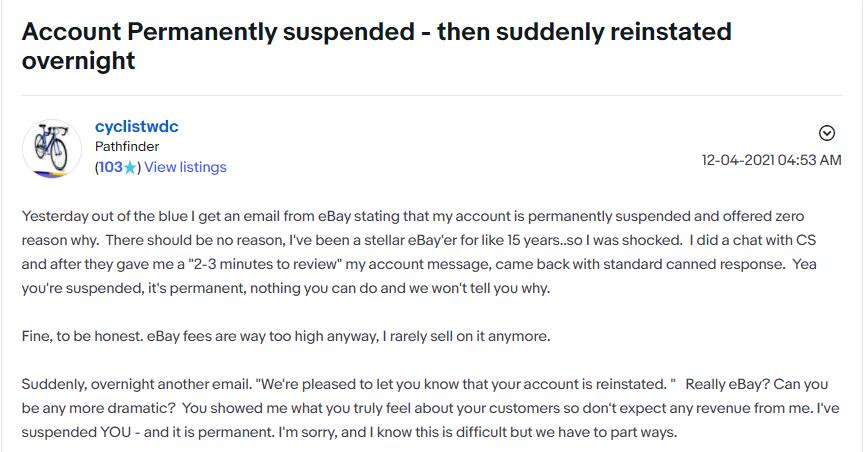 The seller is already inEBay has been selling for 15 years, and the sales volume is also very good. Suddenly, I received an email from the platform to inform the sellerThe account is permanently suspended without any explanation attached,When the seller sends a question, he only receives the set automatic reply. But the next day, the seller received“We are pleased to inform you that your account has been restored”The seller said he was speechless. PlusThe seller said that he would withdraw from the eBay market due to the high cost of the eBay platform. Many sellers have complained about this.

butEBay just made a lukewarm apology statement, which disappointed the sellers. The platform side said that“Earlier today, someThe eBay account has been suspended for no reason. The failure will be resolved within a few hours. We will contact any seller who needs to take action. We apologize for the trouble caused to the seller. "

LikeeBaysellerAs with platform failures, the companyandDidn't give much explanation。 Some sellers said that the platform did not propose to compensate the sellers for their lost sales and the time lost.

The seller's interests are damaged due to the mistakes of the platform, butEBay did not offer a sincere apology, which made many sellers feel cold.