What kind of group images are portrayed by Generation Z with $4.4 trillion on Snapchat platform

Snapchat presents a new picture in the AR field from technology, creation to ecology, and paints a predictable business future based on AR for players and brand owners. Taking the new generation of Spectacles released as an example, it comprehensively carries application scenarios such as learning, shopping, art experience and games, meets the fun and exciting needs of the generation Z players, and further stimulates the imagination of this group of global creatives.

andSnap plays with Generation Z of AR black technology. Some of them are adventurers, rule breakers, and creative artists. There are thousands of them. You can ask Snapchat, their most loyal partner, about the cold knowledge of Generation Z.

AR has a natural affinity for Generation Z. They are not only the main users and consumers of AR, but also the new force of AR creation. Snapchat has conducted in-depth research on platform users in conjunction with multiple institutions, and has depicted the group image of current Generation Z in social networking, consumption and other aspects.

Snapchat's previous Snap Consumer AR Report predicted that by 2025, 75% of the world's people will become regular AR users, with a scale of 4.3 billion, of which the younger generation will account for the majority. Among the young users of Generation Z, Snapchat has obvious advantages in terms of user size and user stickiness, and even dominates the social interaction of young people in Europe, America and the world.

Generation Z is one of the most important consumer groups in the AR industry. Snapchat predicted in the "Generation Z White Paper" that their consumption capacity would increase exponentially by six times, from $4670 in 2019 to $3 trillion in 2030. In terms of consumption mode, Generation Z, born of their own creative Buff, has a high degree of perception of sensory and visual enjoyment. Words have long been unable to meet their social expression. AR and visualization are their ways. Similarly, bland advertisements can no longer attract them, and only the "out of circle" creativity based on AR technology can catch their eyes.

It is noteworthy that,Generation Z is also the core group of AR creativity. The report "The Role of Generation Z in Building a Digital Economy" released by Oxford Economic Research Institute in March this year pointed out that the creativity of Generation Z is the core of the AR era. With a series of digital tools such as AR lens, filter, emoji emoticon, video face changing tool and short video, Gen Z has played AR "tricks". Research by Snap and JWT Intelligence also found that 51% of Gen Z think they are more creative than the previous generation.

Therefore, forAs far as AR institutions and brand owners are concerned, only when they understand Generation Z can they tap this huge potential "treasure". 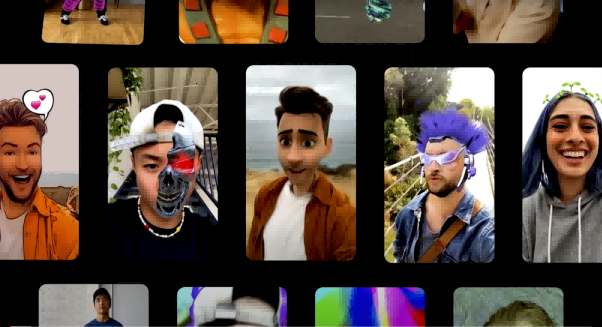 （Some AR filter effects on Snapchat)

24x7 onlineGeneration Z, what are they doing?

Generation Z and the Internet are inseparable, and their growth environment is full of technology products. Snapchat unites with authoritative online consumer research platform Global Web In the report National Youth: Global Trends of Generation Z released by Index, 97% of Generation Z have already achieved mobile phone freedom, and more than 64% of Generation Z have expressed their dependence on network and social software.

aboutFor Gen Z, the Internet and social applications are the "personal show" where they express their value proposition, and also the "playground" where they explore new things and meet new friends. 64% of them like to pursue new excitement, 48% are not afraid of risks and challenges, 47% of them love fashion trends, and they all want to be the brightest guy. Take American college students as an example to see what they like to do on Snapchat.

● Morning, openSnapchat checks the latest news of friends. A friend released a funny video of a game filter. It looks very interesting and I want to take it as a facial expression pack. But first download the game to play.

● break,Snap MapLook where everyone is. They are going to share the facial expression bag they just took. A friend released theAR dining video, we invite you to learn, because 79% of us believe that learning is very important.

● Lunch time, openSnap Scan took photos of ingredients and unlocked 4500 nutritional recipes around the world. You know, there are more than 170 million Snapchatters enjoying delicious moments with scan every month.

● Afternoon leisure, Game of Thrones Times Square, New YorkAR special effects should not be too cool. About three or five friends play a show. 49% of us are serious fans of video apps.

● On the way home, brushThe AR image of simulating the impact of climate change on the coral reef of the Great Barrier Reef released by the Australian partner in Sanpchat can only be deeply shocked. Scan a shared bicycle for low-carbon travel.

● Evening, NoOpen Snapchat for N times, the latest Fendi sunglasses and Marc Jacobs' messenger bag, using Snap The AR filter can be tried on online. By the way, Amway will wear the same model online for friends, and online trial purchase is the choice of 81% of Sanpchatter.

It is not difficult to find that this seemingly complex group is actually a group of young people who like to send facial expressions, videos and photos through visual pictures, and are keen on online music, online movies, electronic games, and cutting-edge technology experience.

（Some wearing effects on Snapchat)

How do Generation Z people recognize the brand?

The rapid development of the digital era has had a profound impactThe consumption behavior and choice of Generation Z, according to the report of Snapchat Generation, there are more than 200 million game players on Snapchat, 82% of whom began to experience games under the influence of people around them, especially friends on social platforms, and nearly 70% of Snapchat said they like to play with friends and family. Grass planting is a step that cannot be ignored by the brand. If you want to circle Generation Z, you need to find an effective social marketing channel. They also showed obvious content orientation differences from the "predecessors", that is, they were more willing to immerse themselves in stories and experiences, and constantly sought groups and objects consistent with their self-expression.

The research results of 12000 users' brand preferences commissioned by Snapchat research agency Kantar also show that in Australia, 65% of Generation Z like to express their identity by brand, while among Generation X and baby boomers, this proportion is only 40%. theyvalueThe values conveyed by the brand, and the true and unaffected brand stories.

Today,Generation Z are showing strong consumption power. According to the survey, although most of them are not yet at the age of full economic independence, 92% of parents believe that children will directly affect the willingness of family consumption. Snapchat research also shows that Snapchat has a consumption capacity of up to 4.4 trillion US dollars, which is also an important reason for a large number of brands to focus on Snapchat to attract young people.

In many application categories,92% of Gen Z likes social apps, which determines that the brand wants to exert influence on this group. The dull words and overwhelming advertisements have already lost their usefulness. It is more necessary to find breakthrough points from social interaction and creativity. The design creativity should be more diversified, and the interactive play method should be more dynamic. At present, more than 100 million people use AR to shop, and AR is also having a direct impact on consumption decisions. In Snapchat's 2021 Consumer AR Global Report, interaction with AR enabled products can increase the conversion rate by 94%. If 3D/AR is provided, Gen Z will be more interested in online shopping and more confident in purchasing. More than 2/3 of consumers said that they are willing to place orders as soon as possible after AR interaction with brands. 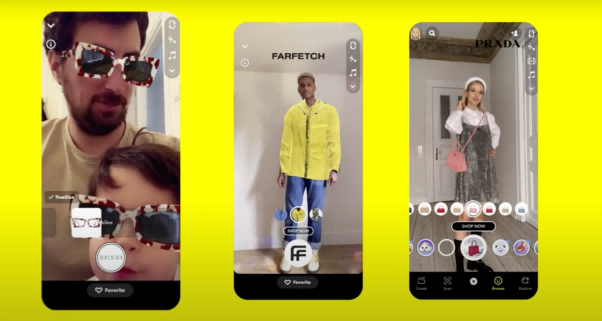 (AR on Snapchat tries on the filter)

At LilithAfter "PICK" the creative marketing of Snapchat's camera, the download volume and ROI of its game "AFK Arena" increased significantly overseas, and Snapchat became its Top3 marketing channel. When Gen Z's social appetite is firmly captured, it will not be a problem for brand owners to successfully possess stable "happiness".