The storage capacity of Amazon 6 is expected to increase in peak season? A large number of listing lost BSRs, and the sales volume halved!

Since the outbreak of the epidemic, Amazon has frequently adjusted the replenishment limit and storage limit, resulting in great pressure on the storage capacity of sellers.

However, the day before Amazon opened its global store, it released a good news that it has improved the FBA storage capacity of six sites around the world, including those in the UK, Germany, France, Spain, Italy and Canada.

The specific adjustment of storage capacity can be divided into two parts.

Since this year, Amazon has built more than 10 operation centers in the UK and the EU.

In addition, seven new operation centers (BGY1, MXP6, MUC3, EMA3, NCL1, MAD7 and POZ2) have been put into use since September 6.

During the holiday sales season, Amazon will increase the inventory capacity for the sellers of the above sites, improve the storage limit and replenishment limit, and try to avoid the situation that the products are out of stock or the sales loss is caused by the failure to replenish in time.

Since May this year, Amazon has been trying to raise the inventory limit of its Canadian site so that sellers can send more goods to Amazon's warehouse.

Another two operation centers are expected to be put into use in November, adding another 5 million cubic feet of storage space.

In addition, the current sellerUp to three months' (sales) inventory can be stored in Amazon Canada warehouse, which can only be stored for 2 months at most.

In short, if the seller sells on the above six sitesThere is an opportunity to send more FBA inventory to Amazon warehouse,Or the logistics center can make full use of the sales opportunities in the holiday shopping season. After all, the traffic of Amazon's platform can see a significant growth during this period.

It should be noted that Amazon has improved its storage capacity on the basis of increasing storage space. This is an overall policy adjustment. As for the change of storage capacity of each seller, it depends on their performance.

The seller needs to pay attention to two points, one is the replenishment limit, the other is the storage limit.

Replenishment limit refers to how many goods can be delivered to Amazon warehouse at this moment, and there are different storage types (such as large goods, clothing, shoes and boots).

Lanhaiyiguan has learned that the replenishment limit is related to the historical and forecast sales of commodities, not to the inventory performance index (IPI).

If you want to increase the replenishment limit, the most direct way is to increase sales. You canConsider self delivery logistics (MFN) or Amazon logisticsNorth American Remote Distribution System NARFThese two kinds of logistics help to increase orders.

The storage limit refers to how many goods the seller can put in the Amazon warehouse.

Of course, Amazon will redefine the next quarter's inventory performance indicator threshold (500 points) at the end of each quarter.

Therefore, if the seller wants to increase the storage limit, he/she should regularly check his/her inventory performance indicators to ensure that they are higher than the threshold specified by Amazon. If they fail to meet the requirements, he/she shouldbrain stormImprove IPI scores。

Amazon does not support sellers to obtain more storage space through purchase.

Amazon said that the replenishment limit has been significantly increased since September.

This part of the seller may need to continue to optimize the FBA inventory. It is recommended to consider removing the inventory without sales volume to make room for other products.

The BSR ranking of products disappeared, and the sales volume was directly halved

While the seller is still happy with the increase of storage capacity, Amazon's system seems to have broken down again.

Some sellers reported that the BSR ranking and category (name) of many product detail pages in their stores had suddenly disappeared, resulting in the products could not appear in the recommended search results, and the exposure and sales were significantly affected,One of the Best Seller products, whose sales volume is reduced by more than half in one day。 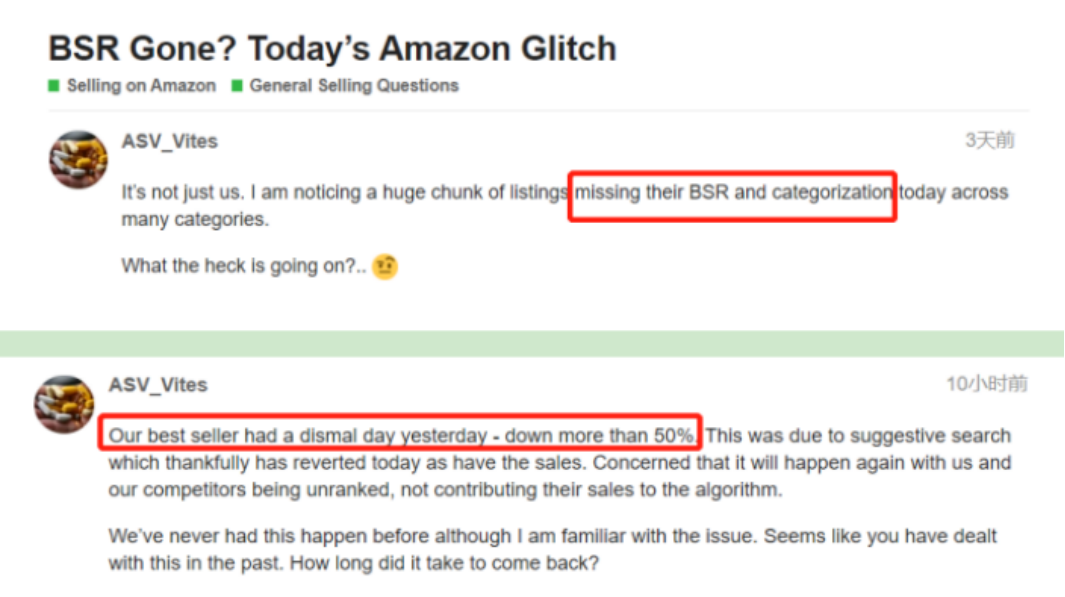 More than one seller encountered this situation. Since last week, the same experience has been continuously reported by sellers.

Some sellers have lost the category and sales ranking of all product listings in 5 days. They have tried to delete the SKU and republish it. They have also contacted the Amazon seller support team, and even opened a case of "category change", which still hasn't been resolved.

Another seller said that only one of the 10 products can see the BSR ranking and category, while the other 9 products are gone.

The disappearance of BSR rankings and categories not only affects the exposure and sales of products, but also makes it impossible for sellers to track the current competitiveness of their products.

Blueocean Yiguan has learned that this situation only seems to occur in some product categories, but it has a wide range of impacts, including not only third-party sellers, but also the listing of first party suppliers, and even Amazon's proprietary products.

Moreover, most dietary supplements and OTC products have been affected.

Some sellers speculate that the probability is that the Amazon algorithm system is adjusted or there is a bug in the system. The same situation has occurred before, but generally the BSR ranking is re displayed soon. This time, it lasted so many days, and I don't know when it can be restored.

In this case, you should take the initiative to contact the Amazon seller support team to provide the sales data of the product, proving that the product should have a BSR ranking. If you can't solve the problem once, you should open the case twice. At the same time, you need to upgrade the case. Some sellers opened the case three times to solve the problem. The final product details page will restore the BSR sales ranking.