Cold? All properties of Shenzhen Dashai were sealed up

According to the latest news, Global E-shop, a wholly-owned subsidiary of Cross Border Communication, was ruled to accept bankruptcy liquidation,Taiyuan Intermediate People's Court issued the Civil Ruling, ruling to seize all properties of Shenzhen Universal. This is the end of Cross Border Brother, which is thought-provoking!

Recently, Cross Border Communication released an announcement that the wholly-owned subsidiary Global E-shop was accepted for bankruptcy liquidation by the court. 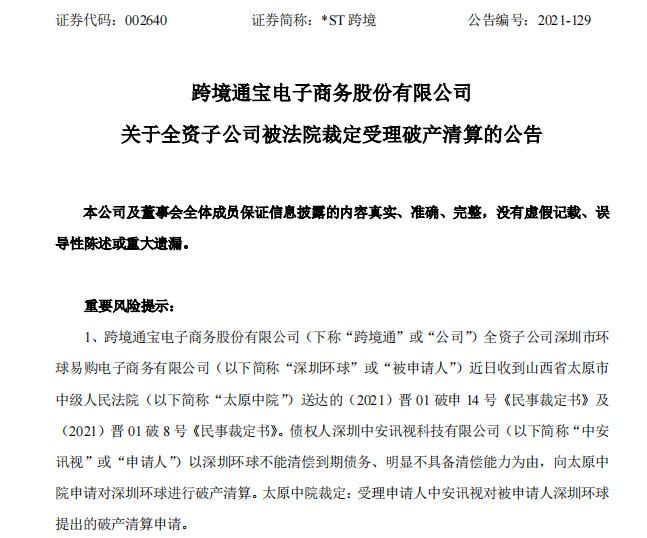 Before that, Shenzhen Universal and Zhongan Video were issued a civil mediation statement by the People's Court of Nanshan District, Shenzhen City, Guangdong Province due to a dispute over the sales contract. However, Globegroup failed to perform its obligations under the civil mediation statement, so Zhongan Video applied to the People's Court of Nanshan District, Shenzhen City for mandatory enforcement. It is reported that,As of the announcement date, the loan has not been repaid by Globegroup, and the amount of the outstanding loan is about2.6 million yuan.

Later,Taiyuan Intermediate People's Court issued the Civil Ruling, ruling to seize all properties of Shenzhen Universal.Meanwhile, Taiyuan Intermediate CourtOn November 30, the notice was sent to Globegroup, requesting it to "submit to the court, within 15 days from the date of receipt of this notice, a description of the property status, a list of debts, a list of claims, relevant financial and accounting reports, and the payment of employees' salaries and social insurance premiums."

On December 3, Shenzhen Stock Exchange issued a letter of inquiry, requesting Cross Border Communication to make the following explanation on the bankruptcy of its subsidiary, Global Easy Buy: 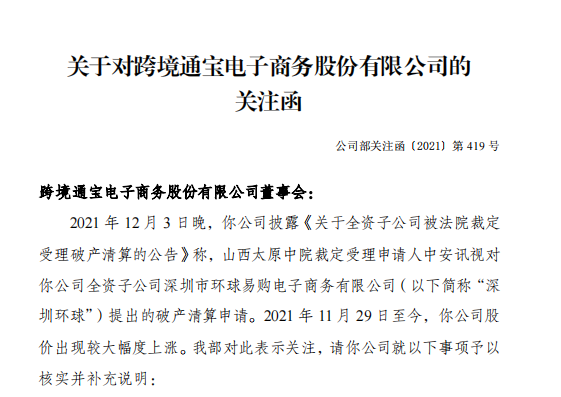 1. Cross Border Communication will lose its control over Shenzhen Universal and will no longer be included in the scope of consolidation. Whether it will have a material impact on the elimination of matters that cannot be expressed in the Company's annual report.

2. Cross border communication needs to be verified and supplemented withoutThe reason for the timely performance of the obligation of information disclosure on the event that "Global E-shop, a subsidiary, was applied for bankruptcy liquidation".

3. Cross border communicationFully remind relevant risks, and explain the substantial improvement measures and internal control rectification progress taken for the matters that cannot be expressed, andThe independent directors are requested to check and express their opinions.

4. Cross border communicationExplain the insiders of Shenzhen Universal's bankruptcy liquidation application, and self inspect the company's directors, supervisors, senior executives and shareholdingWhether more than 5% of shareholders and relevant insiders have bought or sold the company's shares within one month before the disclosure of the announcement。

5. Cross border communicationSelf check whether there are other major events that should be disclosed but not disclosed or in the process of planning in the near future. If yes, explain the relevant details。

In the letter of inquiry, Shenzhen Stock Exchange requested the Cross Border Communication Company to make a written explanation on the above issues, andRelevant materials shall be submitted to the Exchange and disclosed to the public before December 10, 2021, and copied to the local office.

At the same time, SZSE also requires the members of Cross Border Communication Company to abide by relevant laws and regulations and perform their information disclosure obligations truthfully, accurately, completely, timely and fairly.

Cross border communication responds to the statement of delisting

After such a series of disturbances, investors and relevant people may ask whether the Cross border Association will be forced to delist because of this?

In this regard, Cross Border Communication said that if the companyIn 2021, under one of the six circumstances specified in Article 14.3.11 of the Listing Rules of Shenzhen Stock Exchange (Revised in 2020), the company's shares will face the risk of termination of listing.

Under the double shock wave of the epidemic and Amazon, enterprises are faced with many difficulties, and generally do not choose to put eggs in one basket.

Recently, I have gained insight from the enterpriseAccording to the APP, on December 2, the Alphabet Brand Management (Shenzhen) Co., Ltd. was established with a registered capital of 3 million yuan and its legal representative was Pei Hailiang. 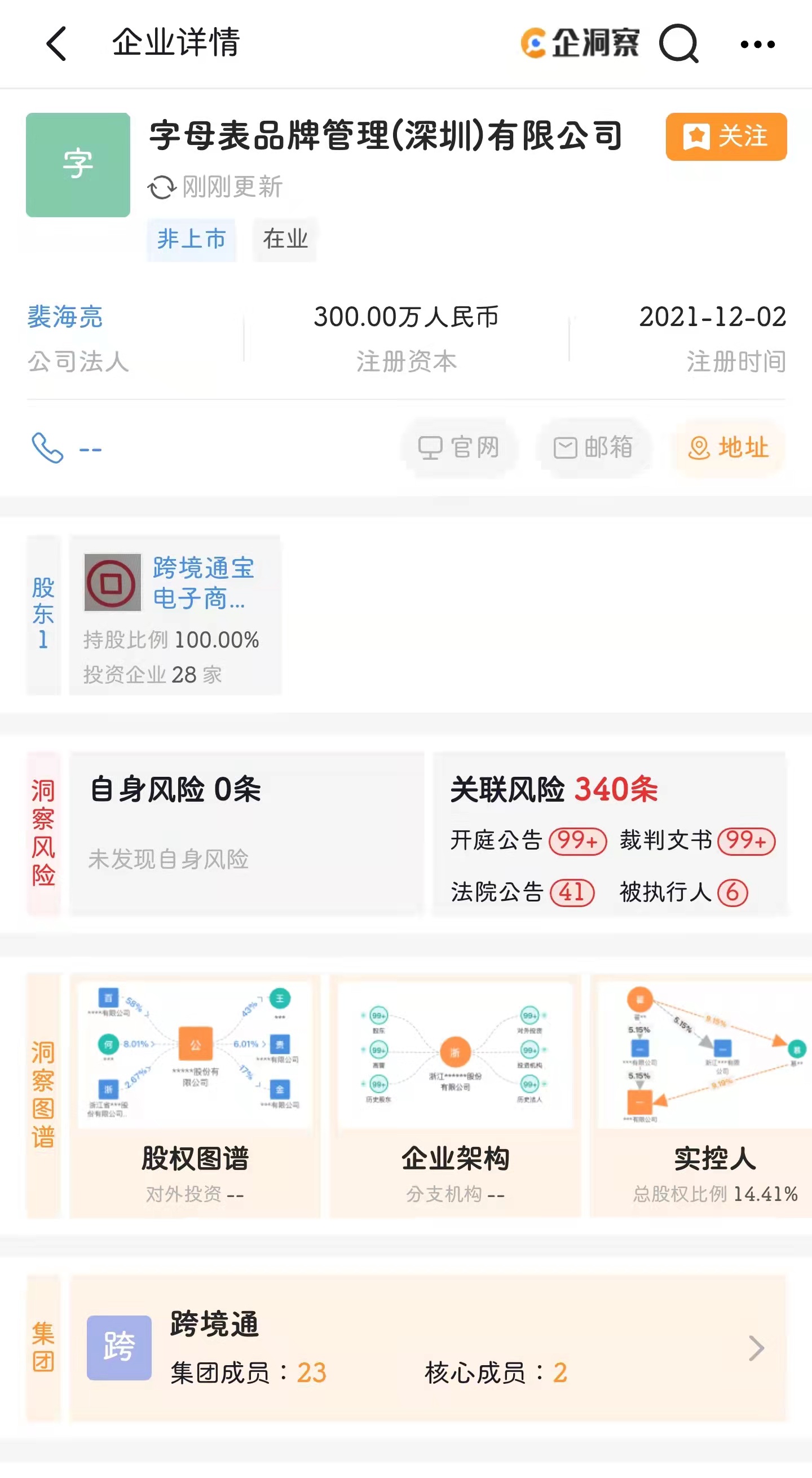 Global E-shop is deeply involved in the negative storm

Since this year, there have been a lot of negative rumors about Global eBay.As early as the middle of the year, Global Easy Buy was collectively asked by suppliers for debt collection because of its poor operation and inability to repay the purchase price. After many times of unsuccessful debt collection, several forced suppliers collectively went to Qianhai No.1In front of Block A, there was a physical conflict between the supplier and Universal Security. Due to the seriousness of the situation, the local police station was even more disturbed. 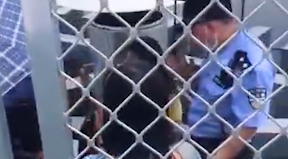 At the end of August, it was reported that Global Easy Buy was in arrears of salary and began to dismiss employees on a large scale. According to the notice issued by Global E-shop, 151 employees will be on leave on August 24 due to business difficulties, and the time of returning to work will be determined according to the company's business situation.

"Seeing him rise, feast guests and collapse," said an industry insider,Although cross-border communication has not been delisted, it is difficult for him to make a comeback，This is the end of the former cross-border brother with unlimited scenery, which makes people feel sad.

Looking back on the middle of the year, the number of titles of Amazon was hitquite a lotThe seller was caught unprepared. Whether it is small and medium-sized sellers who are scared, or head sellers with unlimited scenery, they inevitably fall into this vortex. Some sellers are still struggling to find a way to break the situation, while others have already left the stage in dismay……