The first-line sales of the U.S. Internet reached 10.7 billion dollars, the first decline in nine years

Data display published by Adobe Analytics，The total online consumption of American consumers on Monday wasUS $10.7 billion, down 1.4% from last year, the first slowdown since Adobe tracked it in 2012.

As far as the current situation is concerned, the sales performance of this year seems not as good as that of last year. according toAdobeAccording to the data of$33.9 billion of goods, down 1.4% from last year. 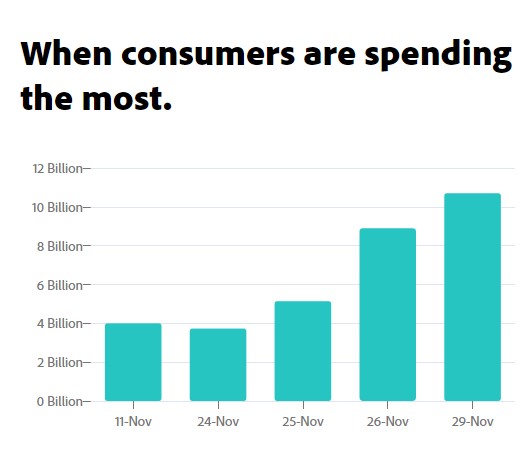 butAdobeHe pointed out that if the time was extended, the situation would be different,fromFrom November 1 to Cyber Monday, sales of online retailers in the United States totaled $109.8 billion, up 11.9% year on year, where daily sales exceedThere were 22 days for $3 billion, compared with 9 days last year.

The reason for this has a lot to do with the situation this year. This year, both sellers and buyers are worried about global supply chain problems. To this end, many e-commerce platformsPromotions will be launched in October, and some consumers do not plan to wait for a time point like Black Friday to shop. They start to empty their shopping carts early.

It is not unreasonable for people to worry about the shortage of goods.Adobe said that in November this year, the out of stock information on retail websites increased by 169% compared with the pre epidemic level.

This year's discount has also weakened.The discount for electronic products on Monday is12%, compared with 27% in the same period last year；The price of clothes has fallen18%, down 20% year on year；Home appliances are only discounted about8%, compared with 20% in 2020. All kinds of inflation from fuel to raw materials，As a result, some enterprises pass on a small part of these costs to consumers.Adobe said that,The final price of online Monday's consumer shopping cart rose year on year13.9%，This is partly because more shoppers have bought large items such as furniture.

The price doesn't look like that"Discount", which also discourages some consumers from buying. Data shows that in the five days from Thanksgiving Day to Cyber One, there are nearly 180 million Americans shopping, compared with 186 million in 2020 and 190 million in 2019.

In a nutshell, American consumers bought much less and earlier this year, but they spent almost the same amount of money due to rising prices.

Next, major sellers will also welcome Christmas holiday sales activities. In addition to the supply chain problem, we are also facing the challenge of COVID-19 mutant strain Omikron.