Shopify is accused of shielding infringing sellers, or facing a 500 million dollar claim!

A few days ago, five publishers filed a joint lawsuit in the US court,indictmentShopify failed to delete the listing and store that infringed the publisher's trademark and copyright, and claimed more than 500 million dollars in compensation. 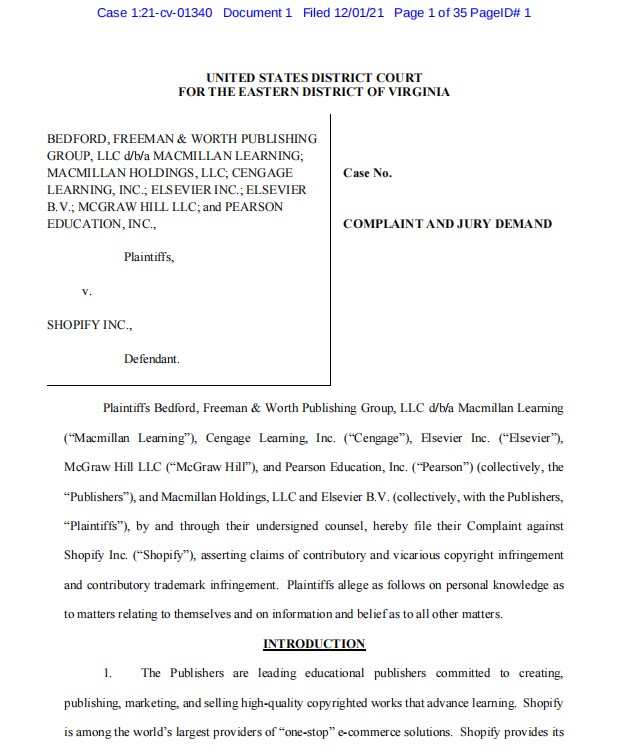 They said in the lawsuit that,Shopify assists platform sellers to sell infringing e-books and profit from them. Publishers said that since 2017, they have successively provided Shopify with a list of infringing sellers. However, Shopify did not prevent these sellers from using the platform, but continued to provide them with services such as store construction, network hosting and payment processing.

Publishers believe that,Shopify has always ignored such large-scale infringement because it is very popular among Shopify users and has played an attractive role in attracting and retaining users who pay monthly subscription fees to Shopify. In addition, the seller of pirated copies also paid the transaction costs, including the commission of those infringing sales.

The publisher requires the court to pay the maximum compensation for each infringed copyrightThe compensation of 150000 US dollars and up to 2 million US dollars for each counterfeit trademark listed more than 3400 copyrights allegedly infringed by the platform.

Harley Finkelstein, president of Shopify, said earlier that if the company found that the store infringed the copyright or trademark, it would delete it. However, the publisher pointed out that anyone who checked the store, including Shopify, could see that they were committed to selling pirated textbooks.

In this regard,A representative of Shopify said that the company was working hard to eliminate copyright infringement, and said that it had multiple teams to deal with potential acceptable use policy violations, including copyright and trademark infringement, and would not hesitate to take action against the store when it found violations. By 2021, more than 90% of copyright and trademark reports had been reviewed within one working day.

Not long ago,Wish was severely punished in France because of lax product supervision and could not be used in major search engines and mobile app storescoverSearch to. The French authorities stressed that when Wish was told that dangerous goods were sold on the platform, these products would be taken off the shelves within 24 hours. However, in most cases, these products were still provided under different names, sometimes even from the same seller.

This sounded an alarm for everyone. If only a small number of sellers were affected by infringement or selling inferior products, only they themselves would be affected. However, if multiple sellers did this, the platform would be at risk of collapse and other innocent sellers would be affected. We should all understand the truth that the lips are cold and the teeth are dead. Compliance management is the best policy.