yesterday,*ST cross-border disclosure announcement said that cross-border communication received the inquiry letter of Shenzhen Stock Exchange's 2020 annual report on May 16, 2021, replied and announced on June 2, and now made a supplementary reply to some of the questions at that time.

It is understood that Shenzhen Stock Exchange has previously sent a query: your company disposed of the original value of the impairment inventory withdrawn in the previous year2.645 billion yuan, the sub subsidiary Hong Kong Globegroup recorded 630 million yuan of commodity procurement after the period, and disposed 1.779 billion yuan of other goods stored in overseas warehouses. The company failed to provide corresponding original vouchers and approval materials, and the accountant was unable to determine whether the inventory of goods, accounts payable and main business costs were true and accurate.

In addition to the false disposal of inventory, Cross Border also mentioned other key issues in its reply.

In response to the failure to provide invoices and valid evidence in the annual audit, Cross Border Communication said that,In 2020, the financing scale of Global E-shop will be reduced. Due to the shortage of funds, the promotion and logistics cannot meet the business requirements, so the income will decline. The business downturn led to a large number of employees leaving for better job opportunities.Because the severance pay and compensation did not reach a consensus, some of the personnel who were connected with the finance failed to handle the handover procedures when leaving, and the finance personnel failed to obtain the accounting vouchers in a timely and complete manner, resulting in the failure to provide the relevant original vouchers and approval materials as required by the annual audit accountant.

The failure to provide invoices is also related to the failure to complete the handover procedures when the employees leave the company. It can be seen that there are a large number of employees leaving the company. According to the previous report,In 2020, the number of employees of Global E-shop will decrease from 3353 to 885, reducing by 3/4. In August this year, the former employees of Global E-shop disclosed that the company issued some post leave notices and listed 151 holiday personnel.

In the inquiry of logistics costs, Cross Border Communication verified that the logistics costs mentioned that,The expense of RMB 129 million incurred in 2020 belongs to inter period expense, that is, the expense attributable to 2019 shall be accounted for from cross period to 2020, so the company reduces the sales expense of RMB 129 million in 2020.

While the business scale is shrinking, Cross Border Communication also has some other losses, which are from receivables.In 2020, the Company had 82.65 million receivables, corresponding to customers as follows: 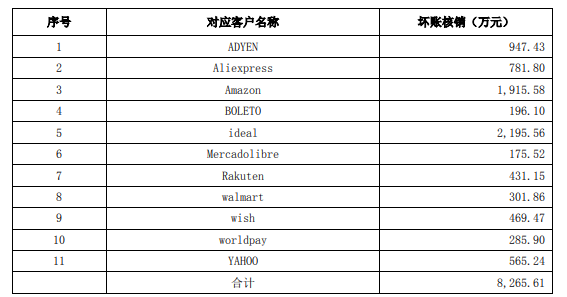 When replying whether there are fictitious transactions and incomes in these receivables of SZSE, cross-border generic termAmong the above accounts receivableabout three hundred and sixty-two50 thousandYuan belongs to the commission commission already deducted by the overseas payment platform,remainderabout46.41 million yuanAffected by the event that Amazon and other overseas websites closed down the Chinese seller's account, the company's seller's account was closed, and the money in the closed account was expected to be unrecoverable。

stay*ST's cross-border disclosure of the false disposal of 4.424 billion yuan of inventory by its subsidiary, Global Easy Buy, aroused concern. Subsequently, Shenzhen Stock Exchange sent another letter of inquiry, asking * ST cross-border to specify the specific year and corresponding amount of the false transfer of current accounts into the inventory of 4.424 billion yuan by Global Easy Buy, and should fully withdraw the specific year and corresponding amount of 2 value reserves in the corresponding year. SZSE pointed out that * ST should make a written statement on the above issues, the relevant accounting firm should carefully check and express clear opinions, and submit the relevant explanatory materials to SZSE and disclose them to the public before December 31, 2021.

When the internal problems of Global Easy Buy attracted attention, its supplier debt problem also made some new progress.

In the bankruptcy liquidation, the court notified to declare the debt to Global eBay

Due to the debt problem, Global Easy Buy was frequently sued,In June, the big sale was applied for bankruptcy, which triggered heated discussion in the industry. However, due to insufficient evidence, the bankruptcy application was not accepted at that time.

The bankruptcy of Global Easco was settled, but the inquiry letter from Shenzhen Stock Exchange was attracted. The parent company, Cross Border Communication, was asked to explain whether the loss of control over Global E-shop and its compliance with the scope of consolidation would have a material impact on the elimination of matters that could not be expressed in the company's annual report, and to supplement the reasons for not timely disclosing information on the bankruptcy liquidation application of Global E-shop.

in fact,On December 10, Taiyuan Intermediate People's Court issued a notice, informing the unit receiving the notice to declare the debt to Shanxi Guojin Law Firm, the manager of Global E-shop, within 30 days, stating in writing the amount of the debt, whether there is property guarantee and whether it is a joint and several debt, and providing relevant evidence materials. 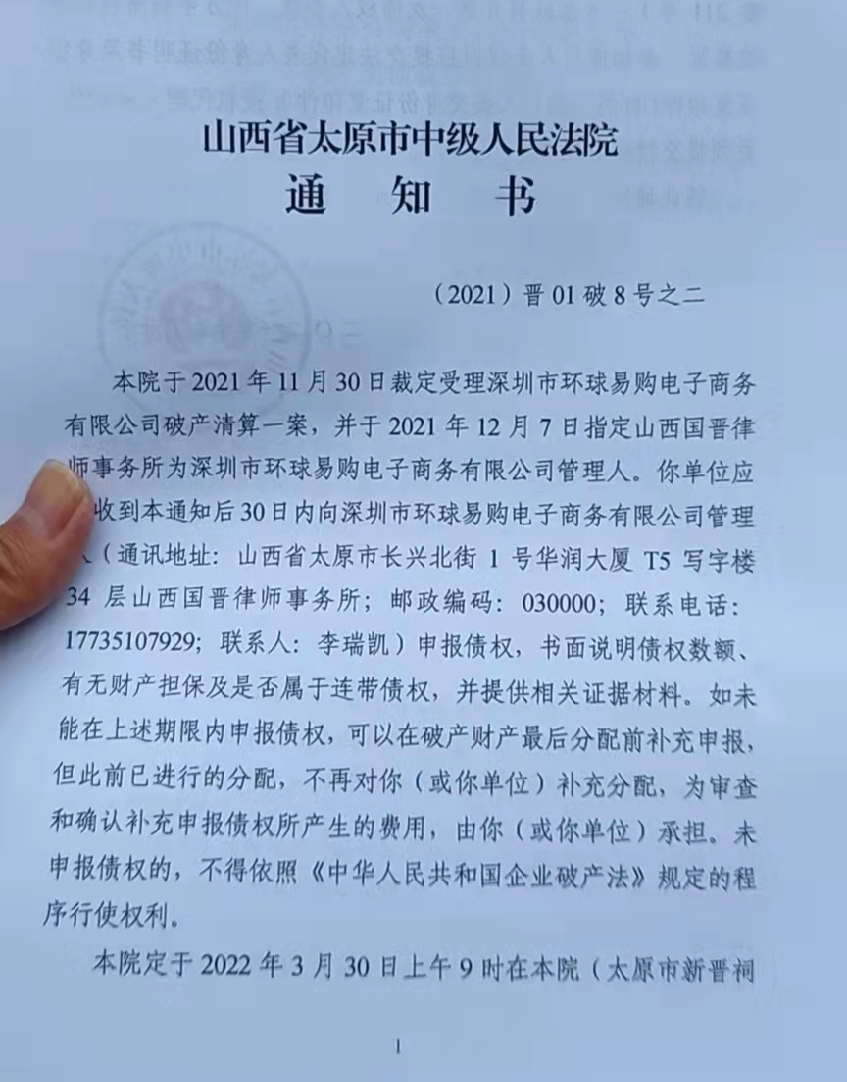 If the creditor's rights are not declared within the time limit, supplementary declaration can be made before the final distribution of the bankruptcy property. However, for the distribution that has been made before, no supplementary distribution will be made to the undeclared person. The expenses incurred for reviewing and confirming the supplementary declaration of creditor's rights will also be borne by the undeclared person. Those who have not declared their claims shall not exercise their rights in accordance with the procedures specified in the Enterprise Bankruptcy Law of the People's Republic of China.

According to the notice, Taiyuan Intermediate People's Court decided toAt 9:00 a.m. on March 30, 2022, the first creditors' meeting will be held in its No. 1 court, and the unit receiving the notice has the right to participate after it declares its creditor's rights.

Half a month after the notice was sent, a large number of suppliers still did not know the news. In a rights protection group, a supplier takes out the notice, andMost of the more than 200 suppliers said they had not received this important notice.

After contacting the manager's law firm, the supplier entered a creditor group, and the group announcement prompted to download the debt declaration form, including"Notice on Creditor's Rights Declaration in the Bankruptcy Case of Global E-shop" and the electronic version of the notice of Taiyuan Intermediate People's Court. Although there is little hope of getting money, many suppliers are still trying to fill in, which may be their last chance of survival.