Check it out! Several sellers received a refund from Amazon

Since this week, many of Amazon's fee changes have come into effect, causing extensive roast from sellers. Not only that, yesterday, some sellers received a new insurance notification email and found that the insurance expense of Amazon's backstage had risen this week1000 yuan, and the insurance scheme is more demanding.

With a series of rising expenses, some sellers finally received good news. Due to previous calculation errors, Amazon willDid you receive the email for refunding the wrong charges from September to October?

Multiple sellers will receive a refund from Amazon

Yesterday, a seller posted an email. Due to previous calculation errors, Amazon will now issue a refund to the seller: 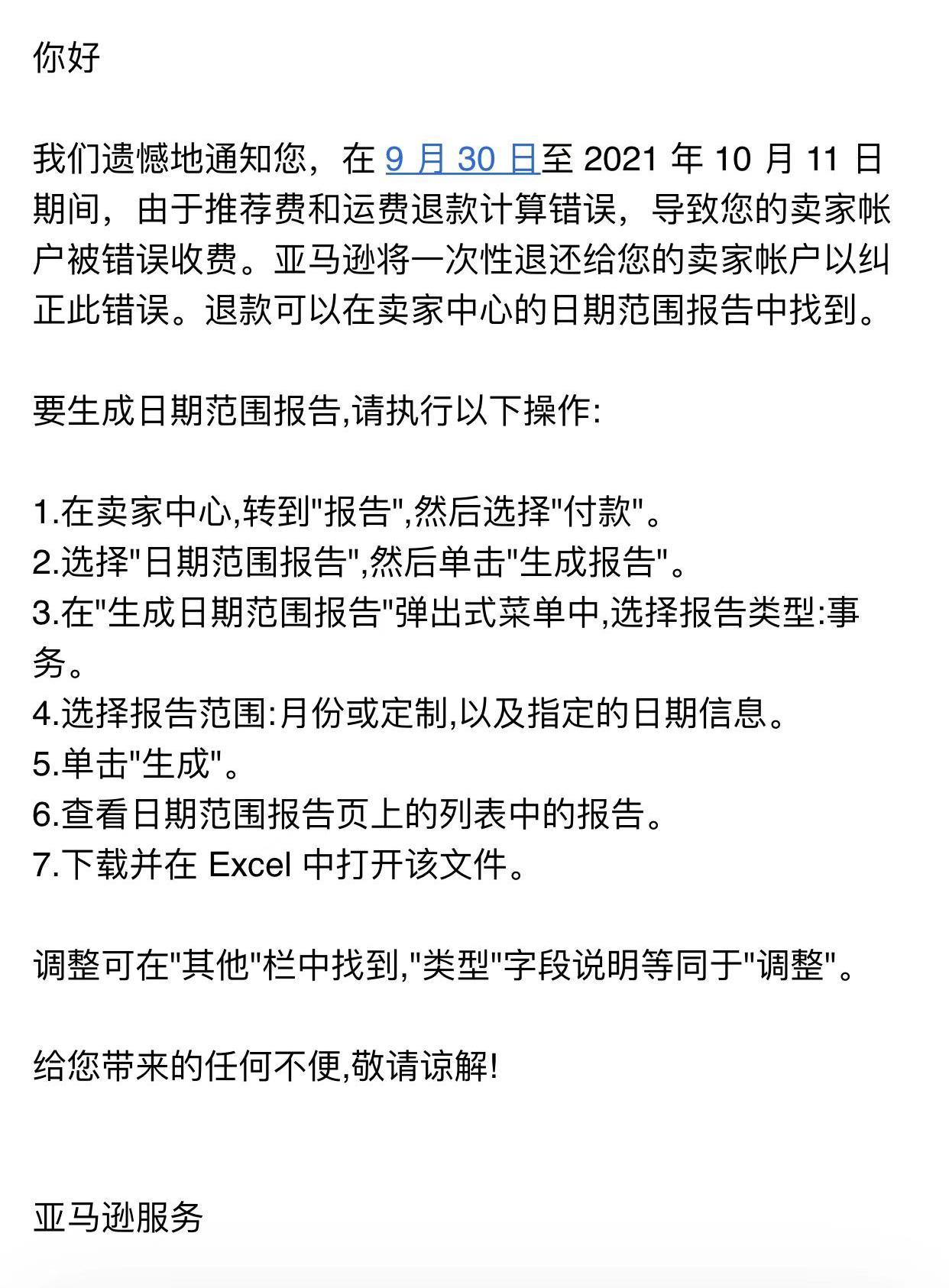 Amazon notifies relevant sellers in an email,An error occurred when calculating the referral fee and freight returnThe fees charged to its seller's account between September 30 and October 11, 2021 are incorrect. Amazon will issue a lump sum refund to the seller's account to correct this error.

The refund can be found in the date range report of the vendor center. The steps to generate a date range report are as follows:1. On Seller Central, go to Reports and select Payments. 2. Select Date Range Report and click Generate Report. 3. In the Generate Date Range Report pop-up menu, select the report type: Transaction. 4. Select the report range: month or custom, and the specified date information.

Many sellers have said that they have also received emails. The sellers teased, is this Amazon's Spring Festival subsidy? However, since the mails are sent in groups, the estimated amount is not large. Small ant legs are also meat, especially after a series of cost increases, this refund can be said to be a little consolation.

As the Spring Festival approaches, the work of most cross-border e-commerce companies in China will come to an end, but Amazon does not consider these. stayIn 2021, many sellers will be in a hurry because of limited storage capacity.This week, the restocking quantity of sellers has risen twice in a row,"Amazon has increased its storage capacity again. It has gone up twice a week since the holiday. It is too speechless."

After hearing this, the sellers checked the storage capacity and found that it had risen again. However, with the holidays approaching, some people said that the replenishment plan before the holiday had been completed, and they did not want to ship any more. Even if they wanted to ship, they could not find people to pack them. However, they were worried that the storage capacity would decrease when they wanted to ship in the coming year, which was very difficult. Can we build it first and then send it back? Some sellers remind that they should pay attention to Amazon's new policies. If they build or cancel the plan too early, they may be refused warehousing.

On January 19, Amazon's logistics shipment policy was updated, which mentioned that if a seller sends a canceled or deleted shipment to Amazon, Amazon may reject it, and the seller's other shipping permissions may also be suspended.

Amazon suggests that the seller, in order to avoid the delay of shipment, should explain the shipment information and ensure that the quantity route is correct when creating the warehousing plan and shipping,"Please communicate with your carrier to ensure that your shipment is delivered to the address on the number label of Amazon Logistics packing box as soon as possible, and no later than 30 days."

The 30 day limit caused the seller's comment: "This is unrealistic, and it basically takes more than 45 days." "30 days, that's too fast!" "Basically, we can only take the Meisen Express for sea transportation, and air transportation can't arrive for 30 days occasionally."

This week, Amazon announced several new policies, and some policies have begun to take effect. In addition, some sellers will also face insurance requirements and rising costs.

Yesterday, many sellers found that the insurance price of Amazon has risen again, and the price has risen greatly.

A seller said that he received an email from Amazon asking him to buy insurance within one month.When clicking on the insurance page of PICC, I found that the insurance price was changed from the original1280 yuan rose to 2280 yuan, which was like riding a roller coaster and suddenly soared. 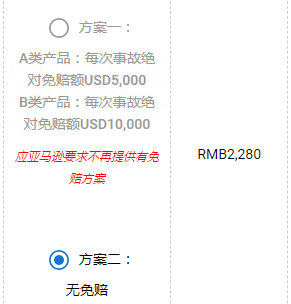 Then, more sellers found that the price of the page where they bought insurance also increased，The original plan I and the partyOption 2 is available. Now only Option 2 can be selected. Option 1 has no choice, but the price of Option 2 is2280 yuan.

The collective doubts of the sellers about the collective frying pan can be summarized in one sentence of one seller:"Has it risen so much? Cutting leeks?"

Now the sellers are not calm after the price increase. Some people began to consult the online customer service of PICC to try to understand the situation, but they waited for a long time to get a reply from the customer service.

One self proclaimed Guangzhou PICC**In response to the seller group's query about the insurance price increase“This isMarsh and PICC Shanghai，Anyway, our fees have been reduced，Previously500, 300 now。 The price increase may be due toThe sales volume is high, or the risk of selling something is high。”

In this regard, Yen Enjun contacted the staff of PICC to inquire about the change of insurance price. As of the date of publication, the insurer had not replied.

It is understood that PICC is one of several insurance companies listed by Amazon that can be selected by sellers. Due to platform recommendations, many sellers will buy through this channel. Now its price has risen sharply, which undoubtedly increases the cost of sellers.

On the Amazon platform, the number of sellers who need to buy insurance is large.from2021From September 1,The sales volume of Amazon has reachedThe seller with 10000 dollars must purchase product liability insurance. With the formal implementation of this provision, the seller who meets the requirements will basically be insured.

According to Amazon'srelevantNotice: If there is no insurance, on the one hand, Amazon will seek compensation from the seller for the expenses incurred in settling the claim, and on the other hand, it may also restrict the seller to sell goods under specific categories until the seller provides insurance proof.

Therefore, sellers will basically complete the purchase within a specific time after receiving the email to purchase insurance. With the expansion of the platform, many sellers seem to have accepted the reality of buying insurance.

However, as one of the insurance platforms for sellers to choose from on the Amazon platform, PICC's sudden rise in prices made some sellers disgusted and confused:"Will other insurance channels increase the price?"