36 krypton goes to sea for the first time | Challenger Capital Investment "Challenger Bank", Cheese has won tens of millions of yuan of Pre-A round financing

36 Krypton went to sea and learned that the "Challenger Bank" in North AmericaCheeseRecently, tens of millions of yuan of Pre-A financing has been completed. This round of financing is exclusively invested by Challenger Capital, and the original investment institution iFly.vc is following. Cheese will use this round of financing to expand its R&D and operation teams in Shenzhen, and continue to promote the growth of users and increase product functions.

Cheese received an investment of 3.6 million dollars in March this year. According to its website, after applying for Cheese's zero charge debit card through mobile applications, users can get up to 10% of the cash back for consumption, 0.3% of the annual basic deposit reward and 3% of the recommended deposit reward, and can realize early entry of wages and free withdrawal through MoneyPass network ATM. Cheese's MasterCard debit card is issued by Coast Community Bank, a member of the Federal Deposit Insurance Corporation (FDIC.

At present, American users who have reached the age of 18 can apply for Cheese accounts after using passports and visas, or social security number (SSN) authentication, without credit records, which is particularly convenient for ethnic minorities and new immigrants who have not yet obtained social security numbers and lack credit records.According to the FDIC survey in 2019The proportion of African Americans, Hispanics and Asians who did not open bank accounts was 13.8%, 12.2% and 1.7% respectively. Ken Lian, the co-founder and CEO of Cheese, was a student studying in the United States and experienced the inconvenience of using traditional banking services. According to him, Cheese has designed its own risk control system based on bank regulatory requirements, so as to simplify this process while complying with regulations.

Cheese's initial target audience is mainly Asian Americans. At the same time, 12% of current users are Hispanics. According to Nielsen, a market research company, the Asian consumer market has reached 1.2 trillion US dollars. However, COVID-19 has had a particularly serious impact on Asian Americans. According to media reports, there were more than 9000 reports of anti Asian incidents from March last year to June this year, ranging from verbal sarcasm to personal attacks. In this context, Cheese has set up a Feedback Fund to help non-profit organizations, communities and enterprises of Asian descent. Cheese users can also choose to donate their registered rewards and cash back income to the feedback fund. At present, the total amount of donations has exceeded 35000 dollars. Cheese also cooperates with more than 300 Asian restaurants to provide customers with cash back benefits.

The epidemic situation has promoted the vigorous development of challenger banks, which compete with traditional banks through digital convenient products. Among many new types of banks, many have targeted specific groups as target markets, such as Greenwood for African Americans and Latinos, Daylight for LGBTQ people, and Purple for disabled people. At present, most of them have not been officially launched. Cheese CEO and founder Ken also believes that the deepening social division of COVID-19 needs joint efforts to bridge, but ultimately the bank provides basic services, and the new bank also needs to rely on products and services to win user loyalty.

According to the data provided by Cheese, since the application was officially launched in March, the transaction volume has increased nearly ten times, with a weekly growth rate of 8%. At present, there are tens of thousands of users, of whom 11% give up their original bank accounts and completely switch to Cheese. Half of the new users grew naturally, and Cheese estimated that their customer acquisition costs were lower than the average of traditional banks and similar new banks. In terms of profitability, Cheese currently mainly relies on the share of the service fees of the issuing bank, and plans to launch gift cards and overdraft functions to enrich its income sources.

Ken said that this round of financing was supported by Tang Binsen, the founding partner of Challenger Capital, and his team also shared the experience of products and customer acquisition with Cheese.

Figure ｜ Provided by the enterprise

On December 16, the fourth stop of "LET'S CHUHAI CLUB Sailing to Southeast Asia Series Salon" jointly sponsored by Singapore Economic Development Council and 36 Krypton Sailing to the Sea will arrive in Beijing. This activity will focus on the hot topics such as enterprise service companies' market strategies in Southeast Asia, how multinational enterprises break through cultural barriers, and discuss business opportunities and challenges for enterprises to go to Southeast Asia, so as to create a next-generation global enterprise.

Welcome to scan the code and fill in the form to register for the activity. 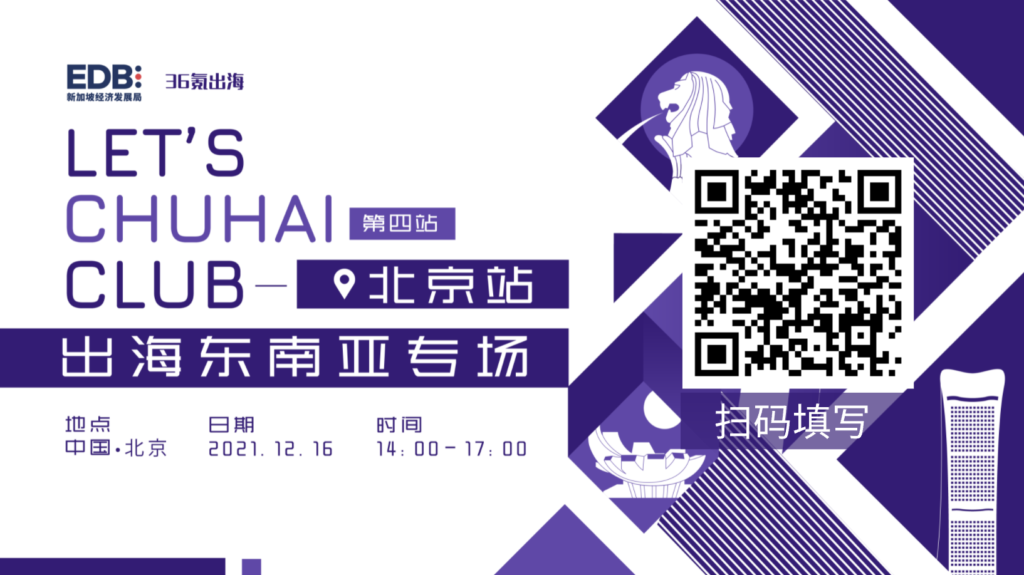