Behind 47 million couples, the track is on fire

Editor's note: This article is fromInvestment communityLiu Fujuan, the author, was authorized to reprint 36 krypton at sea.

In the era of three births, assisted reproduction became popular.

The latest financing is the assisted reproductive brand Weituo Biology, which has just completed a hundred million yuan round C financing, led by the CICC Qichen Fund under CICC Capital, followed by Zhang Keherun and Xiangrong Capital. Surprisingly, this is the second round of financing of Veto Bio this year.

It was found that since this year, at least five assisted reproduction companies have completed financing - Weituo Biology, Nuwa Life, Hewanjia Hospital, DHC Medical, and Haoyunbang. Behind them, there are a number of investment institutions such as CICC Qichen Fund, Songhe Capital, and Dingxin Capital. Here comes the scene: the VC of medical investment began to appear this track frequently.

There is a worthy overlord in the "human creation" Jianghu——Jinxin reproduction。 Located in Chengdu, Sichuan, Jinxin Reproduction is the only private assisted reproductive hospital in the head, serving more than 20000 cases a year. In 2019, Jinxin Reproduction went to the Hong Kong Stock Exchange for listing. At that time, the prospectus cited Frost Sullivan's report, which showed that there were about 47.7 million infertile couples in China. At present, the market value of Jinxin Reproduction has reached HK $32 billion.

After the opening of the three child policy, assisted reproductive technology has brought a ray of good news to those families who "want to have children but cannot".

A rare amount of financing 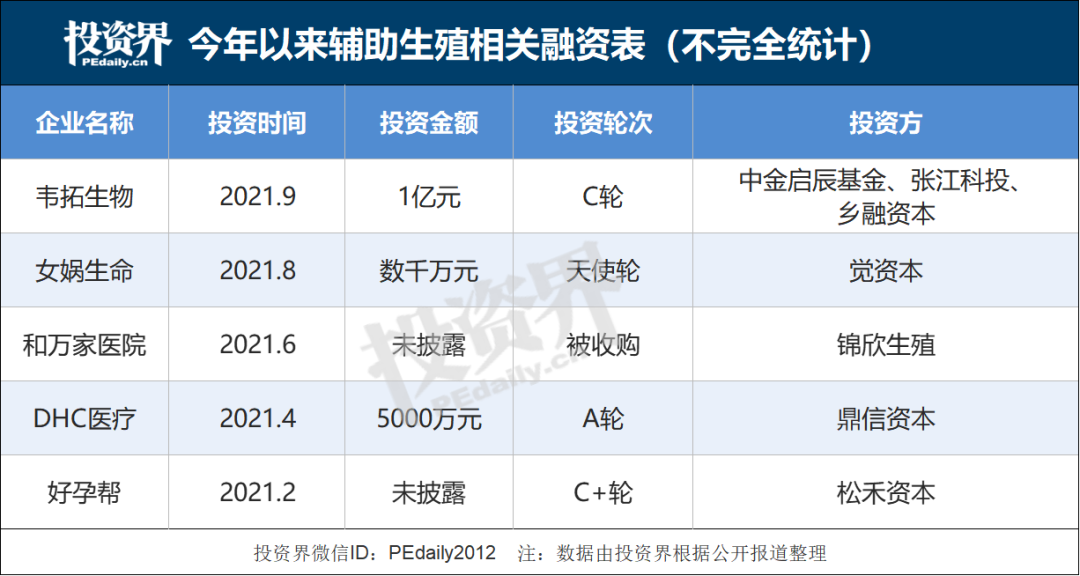 Among them, Weituo Bio has completed two rounds of financing this year. This is an enterprise established in 2015, focusing on products and technologies related to assisted reproduction laboratories. In 2021, Weituo Bio has three products: vitrified cryogen, vitrified thaw and gamete buffer, which have won the Class III registration certificate of China NMPA, and are the first domestic reagents of the same type approved, breaking the long-term monopoly of foreign brands on key technologies in assisted reproduction laboratories.

On August 20 this year, Nuwa Life, a new generation of assisted reproductive technology innovation company, announced that it had won tens of millions of angel investments, which were exclusively invested by JUE Capital.

The Jue Capital team once shared the logic behind this investment: Nuwa Life's new generation IVF screening technology PIMS has a moat built by a deep global exclusive patent, which can directly screen high-quality embryos, reduce the screening cost of IVF and improve the healthy birth rate and fertility quality, with a very strong clinical demand. At the same time, "Nuwa Life" conforms to the national policy of encouraging fertility, and has high social value.

Xu Yi, the head of CICC Qichen Fund under CICC Capital, also said that the liberalization of fertility policy, the increase of infertility rate and the increase of assisted reproduction penetration rate had driven the rapid expansion of China's assisted reproduction industry, and the domestic market for auxiliary reproductive reagents and consumables was monopolized by importers,Domestic substitutionStrong demand, large space.

After 75-85, it became the main force of childbearing

In May this year, the Political Bureau of the CPC Central Committee held a meeting to review the Decision on Optimizing the Reproductive Policy to Promote Long term Balanced Population Development. The meeting pointed out that in order to improve China's population structure, we will further optimize the birth policy, implement the policy that a couple can have three children and support measures.

The policy of opening up is only the first step of the Long March, and how to improve the childbearing willingness of the young generation and related supporting facilities is the key.

These advantages can, to a certain extent, promote the increase of childbearing demand of some people. Not long ago, Ren Zeping, an online celebrity economist, issued a report that the current main force of fertility is not the post-90s and post-00s, but the post-75-85, that is, their ageBetween 36-46。

Assisted reproductive technology is a new choice for elderly calving and infertility couples. At present, among various technologies of assisted reproduction, the most mainstream way of in vitro fertilization is IVF.

The data shows that the average gross profit rate of China's assisted reproductive services industry is about 70%, which is close to or more than that of medical service branches such as medical beauty and stomatology. The downstream server is the main force of the revenue of the whole assisted reproduction industry chain, and the proportion of the server (industry chain) can reach 60%. This is like a blue ocean to be developed. However, due to the high threshold for downstream access, the middle reaches of the industrial chain may become a breakthrough.

We are concerned about how much it costs to have a child through assisted reproduction. A netizen calculated that the drug cost and inspection cost for each cycle of ovulation promotion was about 2000 yuan, the cost for each cycle of artificial insemination was about 5000 yuan, and the price of IVF ranged from 20000 yuan to 80000 yuan. Among them, the first generation is the cheapest and the third generation is the most expensive. If the first cycle is not successful, the cost will increase accordingly.

Taking Jinxin Reproduction as an example, the number of IVF treatment cycles throughout the year is 22879, and the income of assisted reproduction is about 1.354 billion (excluding the income from auxiliary medical services). The average cost for each case is about59000 yuan。

How big is this market? According to the official website data of the National Health Commission, the infertility rate of women over 35 years old in China is not optimistic. One in every six couples in China has difficulty giving birth. Frost Sullivan's report shows that there are about 47.7 million infertile couples in China. Some experts even predict that infertility will become the third disease threatening human health after cardiovascular and cerebrovascular diseases and tumors.

A number of listed companies have been born at the Assisted Reproduction Track.

Here is a company that has to be mentioned - Jinxin Reproduction, located in Chengdu, the hometown of medicine and beauty. After the launch of the new medical reform in 2009, Chengdu has always been the most developed and active area for medical policies. In terms of the number of medical reform and innovation documents, Chengdu is close to Shenzhen.

Until 2018, Wang Guangxi was forced to sell the assets of Jinxin due to the rupture of the group's capital chain. In the process of restructuring and M&A of Jinxin Group, capital played an important role. The company attracted many VC/PE and industrial funds, including Warburg Pincus, Xinyin Investment, Sequoia China, Huiqiao Capital, WuXi AppTec, Hillhouse, etc. In June 2019, Jinxin Reproduction was listed on the Hong Kong Stock Exchange, with a market value of HK $24 billion. At present, the company's latest market value exceeds 32 billion Hong Kong dollars.

Beikang Medical is a domestic assisted reproduction industrygene sequencing It is the first listed company in the field, and the person at the helm behind it is Liang Bo, a science and engineering student.

Around 2010, at the time of domestic entrepreneurship, he decided to create an innovation driven gene technology company to help tens of millions of infertile couples in China have a healthy baby. In order to learn technology, Liang Bo also went to Shanghai Jiaotong University to study for a doctor of biology.

In 2015, Beikang Medical started to promote the registration of the world's first third-generation IVF products with the State Food and Drug Administration, and was the first to enter the national green channel for innovative medical devices in the field of assisted reproduction in China. In February this year, the company that helped infertility families create people successfully landed on the Hong Kong Stock Exchange.

In addition, the Internet medical platform Micromedicine also focuses on the field of assisted reproduction, and has successively strategically invested in the new IVF Medical Group, acquiring 89.5% of the shares of Genea, an Australian comprehensive assisted reproductive technology service provider. At the same time, with the only Internet maternity and child hospital license in China at present, it integrates the micro medical infertility platform, and also strategically controls Beibei Shell. With the help of the latter's layout of offline reproductive medical union, it accelerates the link between online and offline medical union units and more medical union units.

At present, in addition to the listed companies of Jinxin Reproduction and Beikang Medical, there are many assisted reproduction concept stocks, such as Berry Gene, Changjiang Health, Guangshengtang, Lizhu Pharmaceutical, Meditech, Tongce Medical, Tai'antang, etc.

Each IVF family has its own joys and sorrows behind it. "There are three ways to be unfilial and having no offspring is the greatest" has always been a deep-rooted traditional concept of the Chinese people. Even if people are more open-minded and their childbearing age is delayed, having children is still the choice of most couples. If assisted reproduction can help them, it can also be regarded as a model for medicine to benefit mankind. Now, people begin to take off their eyeglasses, and assisted reproduction has come into the mainstream.